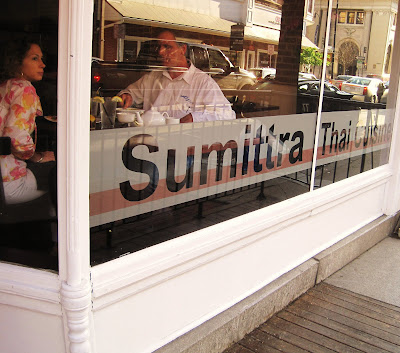 When I heard that a new Thai food place was coming to Frederick, I knew that I would just have to try it because I'm a huge fan of Asian food generally and I never turn down an opportunity to make a fool of myself trying to use chop sticks.  But at the same time, I kept putting off the visit because for me to really enjoy this particular restaurant, I knew that it would have to overcome a totally unfair prejudice on my part.  Namely, Sumittra Thai Cuisine now occupies the space of the former Proof Café, which I still mourn every time I walk past their Patrick St. building.  I knew that this restaurant would have to really knock it out of the park to distract me from visions of sipping hot cocoa in that same space not so long ago, and I am happy to report that Sumittra more than lived up to my unreasonable and ridiculous expectations.
The first thing I noticed was that they really made the space their own, which actually lessened my mind's desire to wander back to memories of the former occupant.  A graphic paint scheme of strong yellow, sheer white and pitch black blended really well with the unchanged ancient brick and wood of this former 18th-century hardware store.  Having removed the old Proof counter, there was much more space in there than I had realized - enough that they were able to add an architecturally interesting dividing wall to the middle of the room while still providing ample table space.
Just looking at the menu was actually an enormous treat for me.  I've been on a self-imposed vegan kick for about a month now, and restaurant dinning almost always means resorting to pasta or salad with explicit instructions to the waiter to refrain from adding any dairy products.  I was so happy (you have no idea...) to find an entire two pages of almost entirely vegan options that I just kind of sat and stared longingly at them for a while.  With the exception of an occasional egg thrown into the mix, all of the spicy sauces that really define Thai dinning are plant-based.  Normally the sauce is mixed in with veggies and poured over rice and a meat option, but Sumittra offers tofu as a substitute to any of the meats, meaning that I had access to nearly their entire regular menu!
I started off with an appetizer of crispy tofu, which is a plate of really big squares of fried tofu that are almost like little biscuits or cakes served with an interesting nut-flavored dipping sauce.  I really liked the squares because not only were they delicious, their size was conducive toward easy chop-stick manipulation, and I can always use as much practice as possible before getting to the rice.
For my entrée, I ordered the tofu ka-prow, which primarily consists of tofu and rice covered in a sauce made from basil and chili powder.  I was impressed by how they were able to use tofu in such diverse ways that I couldn't even recognize it from one dish to the next.  When my ka-prow was brought to me, the tofu looked so much like chicken that I was worried they had mixed up my order with another customer's.  The tofu absorbed the surrounding flavors so well that I might even occasionally order this dish after the period of my vegan diet ends.  I should probably warn you, though, that I have been told my tolerance of spicy foods exceeds that of normal people, and this item was listed in the hottest category on the menu.  I also really appreciated that the meal was served in a long rectangular dish because it allowed me to get a little strafing run when I went to scoop up the rice with my chop sticks, like a pelican diving for a fish.
My friend, Sasha, ordered chicken cashew nut, which she says is a really good neutral dish for a standard American pallet: absent the spice, but full of flavor diversity.
I was really full from the richness of the meal, so I skipped dessert, but Sasha ordered a tall cup of raspberry ice cream and ate it right in front of me.  Based on her facial expressions as she taunted me, I surmised that she found the dish more than acceptable.
I will always miss Proof, but if something else had to occupy that space, I'm really glad that it's Sumittra.  Frederick was in need of another Thai restaurant to fill the void left when the amazing Captain Kyoto's was replaced by the equally amazing Quynn's Attic a few years ago.  It should be noted that Quynn's Attic occupies the top floors of the building that Sumittra is now in, so it seems fitting that a wonderful Thai restaurant should replace a wonderful American café in that particular location.

Sasha's Corner
Hear my friend Sasha give her take on the Thai experience. 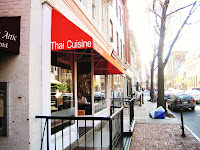 Erik McCabe Anderson
I write for several cool magazines in Frederick, MD and realized that I had too much to write about for physical print media alone.